Teztan Biny (Fish Lake) has been a sacred place of spiritual renewal for countless generations of the Tŝilhqot'in. This beautiful area is integral to the health of the last major Fraser River salmon run. The territory is also rich in gold and copper —  resources ruthless mining companies aim to exploit.

Taseko's New Prosperity Mine was dealt a death blow by the Supreme Court of Canada on May 14, 2020 when it upheld the federal rejection of the mine project. However, Taseko is still pursuing a major exploratory drilling program with provincial approval. The extensive drilling would severely damage Teztan Biny and the surrounding area.

The Tŝilhqot'in have launched a civil action against Taseko and B.C. for infringement of  Aboriginal rights. This is the only way Taseko’s exploratory permits can be quashed (voided).

The Tŝilhqot’in Nation have fought to protect their rights, title and lands for over a decade at great cost. After winning multiple legal battles, they celebrated the final rejection of Taseko’s New Prosperity Mine by the Supreme Court of Canada in 2020.

However, even as the Tŝilhqot'in were clocking victory after victory in federal courts, Taseko was at the same time pushing “exploratory drilling” in the Teztan Biny area, for which they had provincial permits issued to them by the out-going government led by Christy Clark in 2017, mere days before leaving office. Even though the federal government had rejected New Prosperity mine – which we’ve now seen confirmed by the Supreme Court – mineral exploration permits such as Taseko holds are issued by the province, and do not require an actual mine proposal. Those permits are not affected by the Supreme Court decision.

In 2019, with Taseko ready to roll with the exploratory drilling, the Tŝilhqot'in filed a civil action against Taseko, British Columbia and certain British Columbia government officials for infringement of proven Aboriginal rights at Teztan Biny (Fish Lake) and the surrounding area, called Nabaŝ. This comprehensive legal action is the only way Taseko’s exploratory permits can be quashed (voided). The action will be heard in 2022, and in the meantime Taseko has been prohibited from drilling under an injunction issued by the B.C. Supreme Court.

RAVEN will continue to support the Tŝilhqot'in through this new legal action whose goal is to protect the Teztan Biny/Nabaŝ area once and for all from any further encroachment by mining.

“Our collective identity as Nenqayni - people of the Earth – is one that has been defined by Canada through denial of our rightful place. It is time to recognize the Tsilhqot’in as caretakers of the land and the rightful governing body of its peoples."

Tŝilhqot'in vs Taseko:
A Timeline

Tsilhqot’in: Teztan Biny/Fish Lake protected from “New Prosperity” mine  In May 2020, the Supreme Court ended a decade-long push by Taseko Mines Ltd. to build an open pit gold/copper mine. The Supreme Court victory crowns…

VIDEO: Chiefs Lulua and Ross unpack the Tsilhqot’in legal strategy and vision for Nation on webinar

“Tsilhqot’in” means “blue water people”. On June 18, 2020, we were fortunate to get to hear from the stewards of the Chilco River, who caretake the strongest salmon run in the world. We heard from…

New Prosperity mine is dead. Why are the Tŝilhqot’in still in court?

By Ana Simeon / Photo by Nathan Einbinder On May 14, 2020, the Supreme Court of Canada delivered a final coup de grâce to the moribund “New Prosperity” mine project in Tŝilhqot’in territory. The twice-rejected mine proposal…

Keep Me Posted
Who are the Tŝilhqot'in?

The Tŝilhqot'in are an Athabascan-speaking people who have lived in their territory approximately 200 km west and south-west of Williams Lake in central B.C. since time immemorial. The name Tŝilhqot'in carries varied meanings and loosely translates to “people of the river” or “people of the blue water”.

The Tŝilhqot'in National Government encompasses six communities, of which Xeni Gwet’in and Yunesit’in are directly involved in the litigation to protect Teztan Biny (Fish Lake).

Tŝilhqot'in Nation’s Aboriginal title to almost 1,800 km of their territory was unanimously affirmed by a groundbreaking Supreme Court of Canada decision in 2014. The title land covers the Nemiah Valley and stretches north into the Brittany Triangle, along the Chilko River and part of Chilko Lake. That means the Tŝilhqot'in Nation has the right to exclusive use and control of the land.

What is RAVEN’s relationship with Tŝilhqot'in?

The RAVEN community has been with the Tŝilhqot'in practically since RAVEN was founded in 2009. We’ve produced a film chronicling the struggle – Blue Gold:The Tsilhqot’in Fight for Teztan Biny – and screened it at fundraisers and online to raise funds and awareness.

For years, despite having the only proven Aboriginal Title in British Columbia, the Tŝilhqot'in found  themselves embroiled in ongoing court disputes to protect their sacred lands from Taseko’s proposed Prosperity and then New Prosperity mine. The mine would have had disastrous impacts on the environment and Tŝilhqot'in culture and rights. On May 14, 2020, The Tŝilhqot'in Nation was finally able to declare the mining project is dead, celebrating the Supreme Court of Canada decision to deny Taseko Mines Limited’s application to appeal the rejection of the mine proposal by the federal government in 2014.

Meanwhile, however, Taseko has obtained provincial permits to conduct an extensive program of exploratory drilling at Teztan Biny and the surrounding area that would cause significant and irreparable damage. The Tŝilhqot'in have launched a legal action against Taseko and B.C. for infringement of Aboriginal rights. The case is expected to be heard in 2022. If successful, this legal challenge will quash (void) the permits, affirm Tŝilhqot'in Aboriginal rights in the Teztan Biny area, and become a strong deterrent to any future mining company that ventures to pursue projects in Tŝilhqot’in territory without Tŝilhqot’in consent.

Why is Taseko still trying to drill on Tŝilhqot'in territory if its mine has been rejected?

Good question! The company is making use of a legal loophole caused by the division of powers between the federal government and the provinces. The federal government has the power to conduct environmental reviews and approve or reject mining projects of sufficient size and scope to trigger a federal review. However, mineral leases and mineral exploration are under the exclusive jurisdiction of the provinces.

Taseko has mineral leases on Tŝilhqot'in territory that are valid until 2035, and the company obtained its 2017 exploration permits under  B.C.’s Mines Act and the Mineral Tenure Act. Even though Taseko’s comprehensive exploratory drilling program involves drilling 122 exploratory holes and excavating 367 test pits, provincial legislation does not require environmental assessment for mineral exploration.

Taseko previously conducted an exploratory drilling program at Teztan Biny and Nabaŝ (the surrounding area) in 2012, which left the landscape covered with the debris of timber harvesting and the imprints of industrial heavy equipment. Taseko’s new proposed drilling program, which is the subject of Tŝilhqot'in’s current legal challenge, would be much more extensive. It would involve drilling 122 exploratory holes and excavating 367 test pits. The company would build 76 kilometres of roads and trails, 20 kilometres of seismic lines and a 50-person work camp.

Why was New Prosperity mine rejected?

The New Prosperity mine was rejected in 2014 based on environmental and cultural impacts.  The independent federal panel of experts concluded in 2013 that New Prosperity would have significant and immitigable impacts on water quality, fisheries and Tŝilhqot'in cultural heritage, rights and traditional practices. The panel’s report also noted that Taseko Mines was unable to even meet “proof of concept” for its unprecedented, unproven, entire-lake recirculation proposal and that Teztan Biny would be contaminated over time, despite mitigation efforts.

Based on the review panel’s findings, the federal Cabinet rejected the New Prosperity proposal in 2014. This rejection was subsequently affirmed by various levels of the judiciary, including a Judicial Review, the Federal Court of Appeal, and the Supreme Court of Canada, which declined in 2020 to hear any further appeals from Taseko Mines.

Will this legal challenge set a precedent?

The Tŝilhqot'in vision for the area is to create Dasiqox Tribal Park, a protected area that would be open for everyone to visit and enjoy. For this vision to come to fruition, all potential mining projects must be stopped in court. This is the dream which has been propelling the Tŝilhqot'in’s legal actions to protect their territory over the course of the past 12 years.

What is the Supreme Court of Canada Tŝilhqot'in decision? Was RAVEN involved?

In  a precedent-setting 2014 decision, the Supreme Court of Canada unanimously ruled that the Tŝilhqot'in Nation held Aboriginal title to almost 1,800 kilometres of land in central B.C., southwest of Williams Lake. This is the first decision in Canadian legal history that affirms the Aboriginal title of an Indigenous Nation.

RAVEN was not involved in funding the legal work - running to several million dollars - that the Tŝilhqot'in and their legal team put in over a decade and which ultimately led to this ground-breaking decision.

Where does the money go?

All the funds raised for Tŝilhqot'in campaign go to Indigenous litigation. 85% of the funds raised go to Tŝilhqot'in to fund their legal challenge. RAVEN used to levy 15% as administrative costs to sustain our operations. However, as of 2021, the 15% levy is placed into our Discretionary Litigation Fund (see below).

What happens if we can’t use the funds raised?

A Brief History of a Long Struggle

For years, despite having the only proven Aboriginal Title in British Columbia, the Tŝilhqot'in found  themselves embroiled in ongoing court disputes to protect their sacred lands from copper and gold mining. These court battles have been instrumental  in staving off desecration from Taseko’s proposed mine: they have also cost the Nation hundreds of thousands of dollars to fight industry and government in court. RAVEN supporters have been there every step of the way: together, we’ve raised significant  funds for each of the court battles.

The mine that just wouldn't die

Despite the death of the New Prosperity mine,Taseko was issued a provincial permit to conduct exploratory work in July 2017 under B.C.’s Mines Act and Mineral Tenure Act. The exploration permit gave Taseko the go-ahead to build 76 kilometres of roads and trails, 122 geotechnical drill sites, 367 trench or pit tests, 20 kilometres of seismic lines and a 50-person work camp. 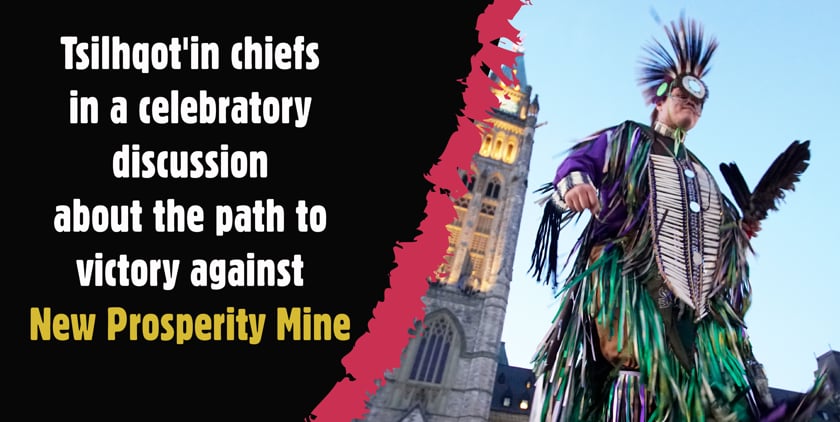 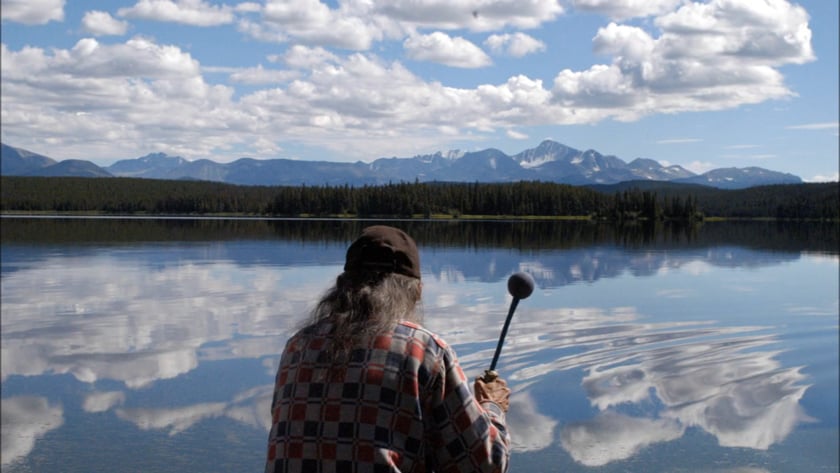 The Tŝilhqot'in vision for the area is to create Dasiqox Tribal Park, a protected area that would be open for everyone to visit and enjoy. For this vision to come to fruition, all potential mining projects must be stopped in court. This is the dream which has been propelling the Tŝilhqot'in’s legal actions to protect their territory over the course of the past 12 years.

Thank you for taking a stand with Tŝilhqot'in Nation to protect Teztan Biny.