The Most Important Tar Sands Case You’ve Never Heard Of

Written by Carol Linnitt for The Narwhal. See the original piece from 2013 here.

Sure they’re bad for the environment, for human health, and for wildlife, but we rarely stop to wonder if the Alberta tar sands are in fact unconstitutional.

But the constitutional standing of the tar sands — one of the world’s largest and most carbon-intensive energy projects — is just what’s at stake in a treaty rights claim the Beaver Lake Cree Nation (BLCN) is bringing against the Governments of Alberta and Canada in a case that promises to be one of the most significant legal and constitutional challenges to the megaproject seen in Canada to date.

Signalling the high-stakes of the whole dispute, it has taken five years of beleaguered fighting just to have the case go to trial. Canada and Alberta — the defendants — fought tooth and nail during those five years to have the claim dismissed outright, saying the case put forward by the BLCN was “frivolous, improper and an abuse of process.”

The BLCN is challenging these governments on the grounds of the cumulative impacts of the tar sands and has indicated some 19,000 ‘individual authorizations’ and 300 individual industrial projects in their claim. The governments of Alberta and Canada tried to have the case dismissed under Rule 3.68, a measure meant to protect defendants from cases that are…well…“frivolous, improper, and an abuse of process.”

But this case isn’t one of those.

Canada claimed the claim was “unmanageable” and “overwhelming,” suggesting the 19,000 authorizations were likely to have fallen within the relevant regulatory framework at the time of their approval and needn’t be bothered with. But, as one judge stated, a claim cannot be dismissed based merely on its scope. The courts agreed, telling Canada that no further “delaying tactics” should be permitted in this litigation lest the entire claim be “stonewalled at an early stage through excessive particularization.”

What is more, the court said Canada’s complaint “flies in the face of the Supreme Court of Canada” and its previous decisions, indicating Canada’s counsel was unsuccessful in its attempts to squeeze out of a tight legal position. Canada even sought to have its portion of the claim whittled down to “limit its exposure” in the case, a position the court said Canada’s “counsel candidly admitted to advancing…for strategic reasons.”

On April 30th, 2013, the courts told Canada and Alberta they’d had enough of the bickering. “The parties will be well-served by returning to their case management judge for the implication plan to advance this litigation through trial,” they wrote.

In other words: get your act together, you’re going to court.

The Alberta Court of Appeal’s decision to uphold the claim against the crown, grants the BLCN the opportunity to argue the cumulative negative impacts of tar sands expansion may constitute a legal breach of the band’s historic Treaty 6 with the Canadian government, signed back in 1876.

And the significance of this judgment cannot be overstated. The BLCN’s claim now stands as the first opportunity for legal consideration of the cumulative impacts of the tar sands on First Nation’s traditional territory and the implications of those impacts on the ability to uphold Treaty Rights.

And First Nation’s Rights — enshrined as Aboriginal Rights in section 35 of the Constitution Act, 1982 — are arguably some of the most important emerging rights on the Canadian legal landscape and certainly the most powerful environmental rights in the country.

This, in part, has to do with the fact that what section 35 rights actually legally entail, is still being developed through case law. Dozens of important cases — like the precedent-setting R v. Gladstone and Mikisew v. Canada — have been decided by courts over the last 30 years, since the patriation of the Constitution, finding Canada in serious violation of the Constitution when it comes to treaty rights.

Despite the emerging nature of these rights, one thing is clear — First Nations have the inalienable right to hunt, trap and fish in their preferred manner, throughout their traditional territories and the province.

And there’s the rub. If you’ve got a megaproject that is destroying what you might otherwise be hunting, trapping or fishing, you’ve got a serious constitutional gaffe on your hands. The Constitution is the highest law in the land, and cannot simply be ignored.

This puts Canada and Alberta in a tough spot. Over the last decade, as they’ve been welcoming a veritable cascade of new projects in the tar sands area, scientists and conservation groups have been raising the alarm as the consequent research began to show devastating effects on caribou populations and fish species especially hard done by the escalating development.

The BLCN’s traditional territories blanket an area about the size of Switzerland. Thirty per cent of tar sands production, or about 560,000 barrels of oil, are produced on BLCN every day. The oil industry has plans to grow this number to 1.6 million barrels a day. 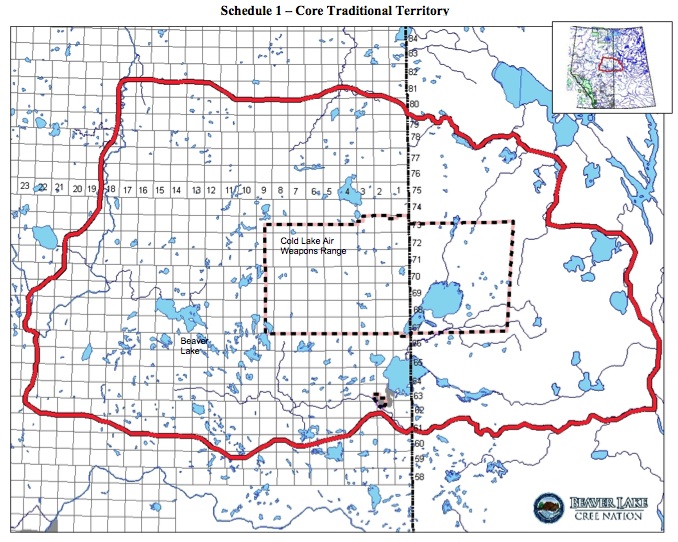 Perhaps it has taken Canada and Alberta by surprise that the cumulative impacts might be considered at a constitutional level. After all, neither the province nor the federal government have been particularly proactive in studying the cumulative effects of development in the area.

True, scientists have been fretting about loss of caribou herds and habitat for decades, even citing the Species At Risk Act as a potential legal cause to slow the pace and scale of tar sands development. But Canada ignored those pleas for caution as long at it could — until another legal action forced them to release the recent Federal Caribou Recovery Act last fall.

And it was only a few months ago that Environment Canada scientists announced tar sands pollution was present in bodies of water up to 100 kilometres from the centre of development. The accumulating toxins, they discovered, disrupt fish embryos at the developmental stage. The federal government worked overtime to downplay the significance of the research last fall, even preventing lead researchers from discussing their findings with the media.

Overall, the federal government has been just as culpable as provincial leaders in keeping these growing environmental effects under-reported, or under wraps. The BLCN’s upcoming litigation may be the change in tide that brings the cumulative impact discussion to centre-stage. 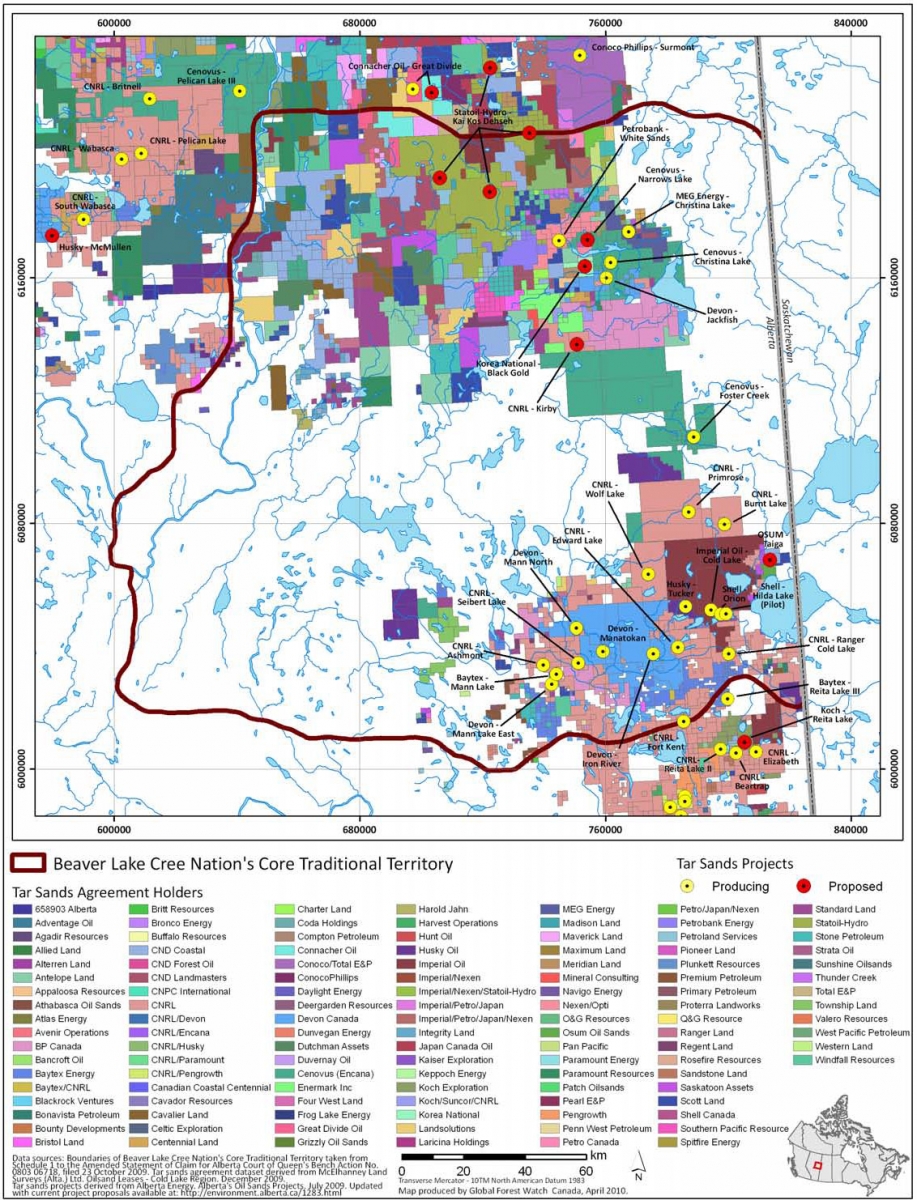 The Cause for Hope

“In 2008 I don’t think my uncle knew the attention this litigation would gain,” Crystal said. “His intent and purpose was to protect what little we have left but it has created this movement, this mobilization of a people and it’s a great feeling seeing people mobilize beyond the confines of race, color, and creed. This recent win means our judicial system is clearly standing strong in the law of Canada and it gives me hope.”

And Crystal has much cause for hope, according to Jack Woodward, renowned Native Law expert and lawyer on the case.

“The Beaver Lake case will define the point where industrial development must be curtailed to preserve treaty rights,” he said.

“At issue is the cumulative impact of industry, not each individual project. The court will be asked to say if the level of industrial activity in the hunting grounds has now crossed the line to make it impossible to reasonably exercise the harvesting rights. If the Beaver Lake are successful there will be constitutional controls on development to allow the land to recover and to prevent any further encroachments that might disturb wildlife populations.”

A precedent-setting ruling of that sort would have significance for any other First Nation making similar claims regarding the overall impacts of industrial development. This could have serious ramifications for other First Nation groups living near the tar sands or newly-industrialized zones like British Columbia’s northeast.

“This would be the most powerful ecological precedent ever set in a Canadian court,” says Woodward, “because it protects the entire biological system with a view to preserving its sustainable productivity.”

Other legal protections like the Fisheries Act or the Species at Risk Act, he says, amount to a “piece by piece approach.” The Beaver Lake Cree litigation “is based on protection of the entire ecosystem,” he adds, and determining that crucial point when that system “can’t take it anymore.”

“So the precedent that will be set by the Beaver Lake case is that it will be the first time a court is asked to draw the line defining too much industrial development in the face of constitutionally protected treaty rights.”

Susan Smitten of Respecting Aboriginal Values and Environmental Needs (RAVEN), a non-profit group supporting the BLCN action since 2009, says just getting the case to trial has been tremendously difficult and expensive.

But the very importance of the case has brought help from all directions.

“We have raised something like $850,000 for the BLCN to cover costs,” she said, “plus we found pro bono lawyers from the UK to assist with the first round on the motion to strike.” People donated, lawyers worked at half-rate, and volunteers gave their time, all to keep the possibility of reaching trial alive.

“Canada and Alberta have done absolutely everything they can to delay and outspend” the BLCN, says Smitten. “This is particularly disappointing with respect to our federal government, which one would hope might support First Nations rights, and honour the promises made.”

However, she says, the tactics of perpetual delay are common practice when it comes to First Nations’ disputes. The government hopes the problem will fade away “because the band can’t keep up with the costs,” she adds.

Smitten estimates the costs could skyrocket up to $15 million once all is said and done.

“With this win, I hope everyone sees the value in assisting this band — morally, financially, emotionally, physically. This is doable. It’s going to trial.”

“I’m always so impressed and astounded that [the BLCN] stay with it,” Smitten said. “The energy it takes to keep this moving forward is incredible.”

The trail represent more than the preservation of First Nation rights and territory, to Smitten. The threat of climate change, she says, is something we all face collectively. Yet, average Canadians don’t have the special constitutional status of First Nations.

“Our Aboriginal peoples will be the ones that rescue Canada from the worst effects of the tar sands,” says Smitten.

“But it’s not fair to rely on the poorest people in our nation to stand alone and be the voice of reason in this effort. They have the power of their treaties to protect the planet, and we have the power of a nation to support them. I just encourage people to get behind the line they’ve figuratively and literally drawn in the tar sand.” 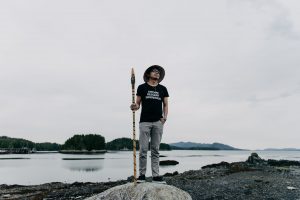 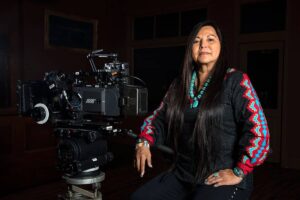 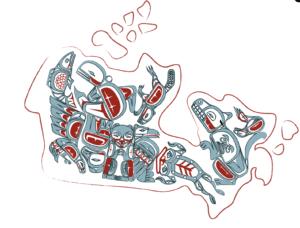 We were fortunate to have Gitanyow's Tara Marsden