When Saik’uz First Nation and the Yinka Dene Alliance first joined other First Nationsto declare that the Enbridge Northern Gateway pipelines and tankers project would not be permitted in our territories, there were many people who said the project was too big to stop.

But after more than a decade of fighting the project at community rallies, shareholder meetings and in the courts, Northern Gateway is finally dead. The fight against Enbridge was about upholding our own indigenous laws to protect the lands and waters that we all rely on, and we knew that this work was bigger than any pipeline.

That is why the Yinka Dene Alliance is donating the remainder of the money we raised in our Northern Gateway battle to the Pull Together fundraising campaign for First Nations challenging the federal approval of Kinder Morgan’s Trans Mountain project in court. It is also why I recently travelled to the Coast Salish territories of the Musqueam, Squamish and Tsleil-Waututh (in Vancouver) to speak at an event supporting the Pull Together fundraising campaign.

In 2012, as Chief of the Saik’uz Nation, I stood with other Chiefs from the Yinka Dene Alliance in Whey-ah-Wichen (Cates Park, North Vancouver) as the Tsleil-Waututh Nation and the Squamish Nation signed the Save the Fraser Declaration. The Declaration, which the Yinka Dene Alliance launched in 2010, is an expression by First Nations that, under our own laws, we have prohibited the construction of tar sands megaprojects in our territories.

Since then — with developments like the Supreme Court of Canada’s 2014 decision recognizing the Tsilhqot’in Nation’s title and management authority in its territories — Canadian law is evolving more and more to recognize what we have always known: indigenous laws are law, and indigenous governance cannot be ignored. The Save the Fraser Declaration is an important affirmation of our own jurisdiction as indigenous peoples to protect our territories from unacceptable risks.

The Save the Fraser Declaration is also a statement of mutual support among the First Nations that have signed it. So even though Northern Gateway no longer threatens Yinka Dene territories, I know that our work is not over.

Ultimately, the fight against Northern Gateway and Trans Mountain are the same.

Our work is not over because the risks posed by projects like Trans Mountain to the water and salmon are risks borne by everyone, since the water connects us all. Our work is not over because there can be no nation-to-nation relationships as long as federal and provincial governments continue to make decisions without recognizing the jurisdiction and laws of indigenous peoples.

Our work is not over because countless First Nations, local governments and individuals impacted by Trans Mountain supported us in our fight against Northern Gateway, and we must continue to show our gratitude and support for them. 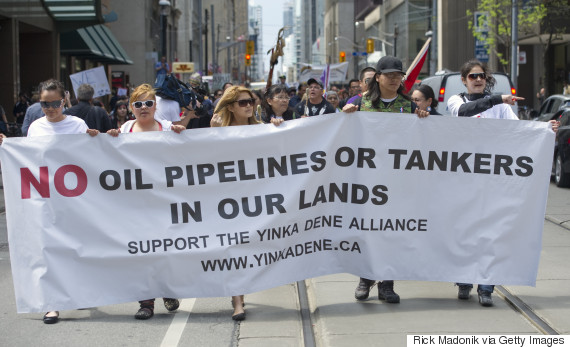 Over the years, we stood together against Enbridge with many others. When members of the Yinka Dene Alliance and other First Nations launched legal challenges against the federal approval of Northern Gateway in 2014, people across British Columbia and Canada raised over $600,000 for our court cases through the Pull Together fundraising initiative. This kind of unity and support was critical in defeating Northern Gateway.

Now Pull Together has launched a new campaign to raise funds for First Nations’ legal battles against Trans Mountain, and it’s our turn to show our support. While the Yinka Dene Alliance’s contribution to the Pull Together initiative is just a fraction of the cost of a legal challenge, we hope that it encourages others to do what they can to support First Nations that are protecting their territories from the risks of Kinder Morgan’s Trans Mountain project.

Ultimately, the fight against Northern Gateway and Trans Mountain are the same. They are about standing up for a future where the laws and jurisdiction of indigenous peoples are respected, and where we care for the earth in the same way that we care for our family.